The great debate continues. Should cucurbits (cucumbers and melons) be direct seeded in early May, or should they 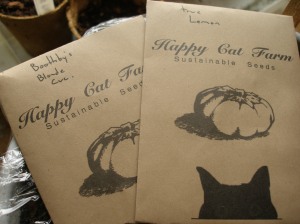 be started indoors three to four weeks before the frost-free date? (Which, in POD’s case, is April 20thish.)

Philadelphia doesn’t exactly count as a “colder area of Pennsylvania”, but light begins dwindling on the little blue deck by the end of August so a head start seems like a good thing. If you have the luxury of full sun through September, you might want to go for the direct seeding.

And, because these heat lovers like it hot, POD will patiently, yes, patiently, wait until three true leaves have formed and outside temperatures are reaching the 70s. In other words, they probably won’t hit the deck until May — about the time the Philadelphia County Penn State Cooperative Extension recommends direct seeding.

3 thoughts on “Some More Seeds”