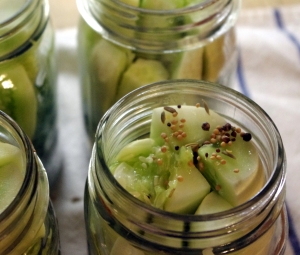 What’s a gardener to do with nearly four pounds of White Wonder cucumbers? Cucumbers that were, oh, less than spectacular for eating? Why, ask the Endurer if he’ll do some canning on a 90-odd degree Sunday afternoon, of course.

Your intrepid gardener will let know how they taste in a month or so, but for now, here’s the recipe:

1) Boil water, vinegar, and salt with some of your pickling spices
2) Put a clump of dill, 2 cloves crushed garlic and the remaining pickling spices in your canning jars. Cram in as many cucumber spears as tightly as possible.
3) Pour in boiling brine, leave a half inch head space, cover, and process in boiling water for 15 minutes.