To thin or not to thin? File this under “not complaining,” but all five (that’s five apiece) General Lee, Speedy Green, and Supremo cucumbers and Honey Bun cantaloupe seeds germinated. They’ve already been brutally culled to two per pot, but is further thinning called for? 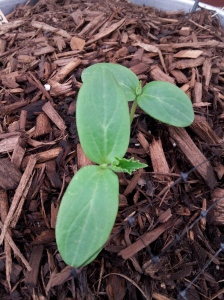 In part, this post is serving as a self-imposed “do it right” mandate. You see, it kills this gardener to off perfectly good plants. But history (and horticultural extension after extension) suggests limiting tomatoes, cantaloupe and cucumbers to one per 5-gallon bucket.

The General Lee pictured here is housed in a 5- or 6-gallon pot. Cousins Coy, Vance, and Daisy have already bit it and when 3-5 true leaves are in evidence (one can be seen budding here), Luke will join them. Leaving Bo behind the wheel, where he belongs.

Thinning tip: never pull a cucurbit from the ground — its fragile root systems may be damaged — but instead, use your fingernails to snip the stem just below the soil line.

(The Honey Bun gets a little pass: two seeds will remain in the 20-gallon Rubbermaid bin.)