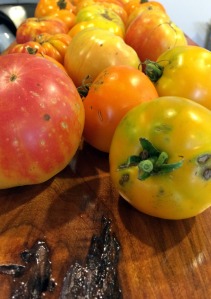 First there were tomatoes. Eight pounds of them. 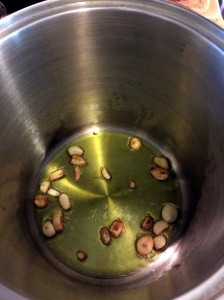 Next there was garlic. 21 cloves. 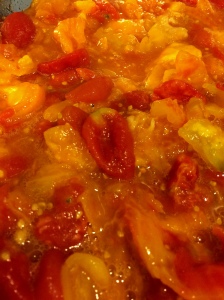 Then there was gravy. Frankies Spuntino style.

For years I struggled to make a decent tomato sauce. In went the onions, the garlic, the dried herbs(!), the carrots(!), the vinegar, the sugar, the whatever. I’m Dutch. I’m not supposed to make a good sauce.

And then I moved to Philly and discovered gravy. Not just any gravy, but my Italian friend’s grandma’s gravy. Which is damn fine. And simple. But I still couldn’t do it right. And then I discovered Frankies Spuntino. Yeah, it’s sauce, but is so much more. With so much less.

1/4 to 1/3 cup olive oil
10-20 cloves garlic
8-10 lbs fresh tomatoes (I used a combination of plum tomatoes, Mr. Stripy and yellow tomatoes –which made for a lovely-looking gravy. But Romas are the way to go.)
Large pinch of red pepper flakes
1 1/2 tsp salt