It’s been a while. A good, long while.

Now that this gardener writes posts and website copy for a living, she’s much less inclined to write for POD. It’s kind of like the carpenter’s house that’s in a constant state of construction. There’s only so many nails you can hammer and there are only so  many words in a week.

Which is a shame, really, because now there’s no written record of my end-of-season success and failures. And unlike the Hurricane, my pre-occupied memory is a faulty beast.

At any rate, here are a couple of photos excavated from the over-stuffed memory of my phone. Bless technology and date-stamping. 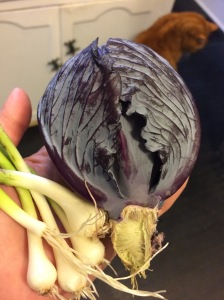 Cauliflower: Ordered as starts from Burpee’s, these beauties were harvested in mid-December. Of the six, though, three fell victim to cabbage loopers and weird slimy heads, likely the work of some cold, wet weather and the aforesaid evil worms.

Daikon radishes: Oh my, best things ever. Even if they’re bigger than my arm.

Carrots: These touchon carrots, plated rather late, provided an oh-so-welcome scavenger hunt for the Hurricane. Nothing says January 30 like a bowl full of sugar-sweet carrots. The Hurricane’s squeals of carrot digging delight? Priceless, as they say.

With any luck, these late bloomers will play a starring role this fall/winter. Next year, though, I’m hoping to have a little more time and patience for seeds. Organic cauliflower in December, pretty amazing. Cost-effective? Absolutely not.