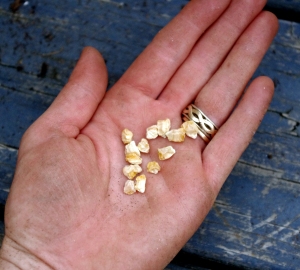 Watching field corn grow is one of summer’s true. pleasures.

Eating garden-fresh sweet corn is another.

But Plants On Deck is a container garden and even we’re not that crazy. Until now. Thanks to the mad scientists at Burpee, there’s reason to hope. Supposedly these little seeds will produce 4-5′ stalks — on which one can expect “two to three delicious 7-8″ long ears per stalk.” Pop nine seeds in a 24″ container, wait two months and see.

The On Deck hybrid from Burpee seems too good to be true (and the one review posted on the site is not terribly encouraging), but that’s not going to stop your trusty POD gardeners. Stay tuned.

Last year’s struggles with diseases and less-than stellar yields means that POD’s giving hybrids a shot this year. Vaguely creepy, but if they work…

Holy crap! As POD’s Seeds of Change shopping cart was being populated, these $24.50 (for 50 seeds) got the axe.  And, since Warminster’s Burpee will be providing tomato seeds anyway, we’re hitting them up for the Salad Bush Hybrid, too: “High yields in small spaces. Very compact, strong tolerance to powdery and downy mildew, left spot, mucumber mosaic virus and scab. Very tasty slicers 8″ long, with smooth, dark green skin.” It’s been a while since bush cucumbers had a space on deck, so it’s time to give ’em another shot anyway.

Bonus: And Burpee tossed these into my already over-stuffed shopping cart, the White Wonder, “Burpee introduced this now classic cucumber in 1893, after receiving it from a customer in western New York. Pale ivory, the 6-8″-long and 2-3″-wide fruits have an exceptionally crisp texture, making for excellent fresh eating or tasty pickles. Produces high yields, even in high heat.”

Each year, POD vows to grow buckets of beans. And each year POD fails. So this year, we’re going all in; with three varieties in two locations.

They’ll be direct seeded in moist soil that’s had a few weeks to warm (to 60 degrees or so) and they’ll be dusted with a smattering of rhizobium bacteria to help convert airborne nitrogen into nitrogen the plant can use. Then, they’ll be left alone to germinate before getting too much water, to avoid seed rot.

Beans prefer a light, fluffy soil with a pH of 5.8 or above.

Provider Snap: “Productive, early, round 5-8″ bean. A favorite because of its upright growth, virus resistance, and high productivity in a variety of climates.” Sounds perfect, no? Here’s hoping this bush bean works well in some of POD’s 1-gallon buckets.

Grrr. So, these weren’t available. Thankfully, due to a really obnoxious web error yesterday, POD’s order never got placed with Burpee. So, back to Burpee, then, for their Romano Heirloom “Pole beans yield much longer than bush beans, right up to frost… Distinctive, full flavor and very heavy yields. Vines are loaded with long, stringless, flat-podded green beans. Delicious fresh and terrific for freezing.”