Note to future self: 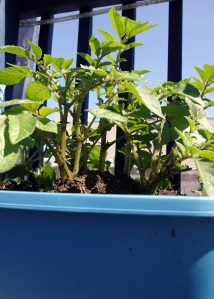 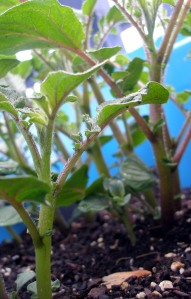 Just a few weeks ago, the French fingerlings emerged. Finally. It’s amazing what three weeks, a little Bennett Compost, and some natural rain can do.

Plants on Deck enjoyed some much-needed attention on Friday  and these potatoes were first up on the to-do list. As they had shot up from no inches to eight inches in just 14 days, it was time for the first application of additional dirt.

A layer of compost and potting soil was gently hilled around the potatoes, covering 2/3 of the exposed plant, leaving just a few inches exposed.  And wouldn’t you know it? Just four days later and they need (make that “desperately need”) another hilling.

Which means the stroller’s going to be doubling as a wheelbarrow tonight.

Note to future self: the deeper the container, the better!

It only took about a week longer than anticipated, but the French fingerlings say, “‘Allo!” Vigilance has been employed and the soil has been kept (more or less) consistently moist, yet somehow not soggy.

Happily, Plants on Deck just received a delivery of Bennett Compost, so  in other couple of weeks, rich handfuls of Bennett’s best will be hilled around the growth.

These ginormous French fingerling seed potatoes could have very easily been cut into smaller segments. But that would require 2-3 days “healing” time. Which would require some advance planning. Which, alas, the good folks at POD no longer really do. When it comes to gardening, at least. 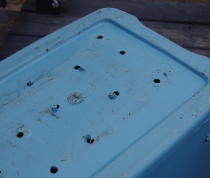 But hey! Potatoes! Something that’s never before been tackled here at Plants On Deck — as they don’t play well with tomatoes, they’ve never been planted. But the tomatoes are moving to the front of the house this year (where sunlight is more direct and water is more readily available), so potatoes are the new tomato.

These babies were plopped on top of about four inches of dirt, six inches apart, and topped with another three inches of soil. The 18 gallon container (drilled well on both the bottom and sides to promote drainage) is home to five seed potatoes — which is, perhaps, a little tight, but we’re planning on harvesting a majority as new potatoes,  anyway.

Happily, the heavens opened soon after the spuds were planted. The tricky part’s going to be keeping the soil consistently moist (not too wet nor too dry) until harvest.

In a few weeks, once the plants reach a towering height of six or eight inches, they’ll be “hilled” (that is, some more dirt and compost will be gently mounded around them, leaving about two-thirds of the plant exposed). This hilling process will be repeated until the plants reach to top of the bin. After the plants have bloomed, POD’s sending in the little fingers to find the wee fingerlings.