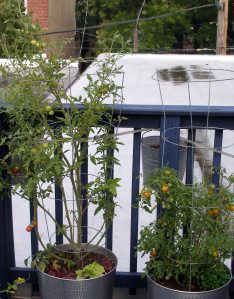 If you ignore the yellowing, early blighted leaves (which were snipped moments after this photo was snapped), you’ll see a still-producing Isis Candy cherry tomato towering above its neighboring Gold Nugget.

It towers because it’s an indeterminate — that is, it keeps going and growing and going. Until diseases finally fell is, that is. The Gold Nugget, one the other hand, has about had its day. It has reached its determined height, produced a couple pounds of tomatoes, and is about to expire.

The determinate vs. indeterminate is an important consideration for gardeners, especially those with limited space. Like, for instance, this particular roof deck gardener.

This year, POD selected two indeterminate varieties (the late Chocolate Cherry and the ailing Isis Candy) and two determinate varieties (Gold Nugget and Tumbling Tom). Because POD’s seduced by the idea of an ever-growing, ever-producing tomato, the larger and ungangly and space-hogging indeterminate is quite fetching. However, because disease is a constant lurking threat, the short(er)-lived and compact determinate has its merits.